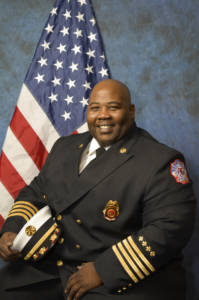 Chief Stewart is a firm believer in education and training and has developed a passion and love for Fire and emergency services training. “I believe with the combination of Basic & advanced Fire training, Higher Education and learning and effective leadership the loss of fire fighter lives and the threat of injury will be effectively reduced” in addition to the reduction of loss of life and property in the community due to fires, by developing, mentoring, and building fire fighters with  professionalism, premium quality training and experience .”

Chief Stewart started his Fire service career as a Fire Explorer with the City of Hazelwood, Missouri Fire department Explorer Post #9348 at the age of 15 to age 18, in which he was promoted to the rank of Explorer Post Captain and Training Officer. Chief Stewart would also become a Kinloch Fire Protection District volunteer fire fighter beginning January 15, 2000 at the age of 17. Chief Stewart was promoted to the rank of Fire Captain and Fire District training Officer in 2005, then promoted to Assistant Fire Chief of the District in 2017 and was appointed as the New Fire Chief of the Kinloch Fire Protection District March 5, 2019.

Chief Stewart is no stranger at all to public and community service, as he currently serves as an Ordained Deacon of the church at The Christian Life Center in Florissant, Missouri. He enjoys serving as the Co-Director of the Safety Team, member of the church Choir and Male Chorus. He currently serves a congregation of 500+ members. He is also very close knit with his family and loves family gatherings and attending community events.